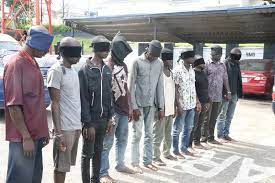 The concept of maritime security and safety goes beyond policing waterways to keep them free of criminals and objects that impede activities that are associated with the entire maritime ecosystem. It also goes beyond deployment of equipment and manpower to keep pirates and other criminally-minded elements at bay, or clearing of waterways of wrecks and relics to prevent accidents and ensure free navigational pathways for maritime activities to thrive.

Achievement of a secure and safe maritime environment requires the collaboration of stakeholders within and outside the sector; those directly involved in maritime activities – regulators, security agencies, operators, etc. – as well as those who may not be directly connected to the sector, but whose inputs may impact on the overall achievement of the objective of having a conducive maritime environment. This includes the judiciary.

The Gulf of Guinea is considered the least secure and most unsafe maritime environment in the world. Being the biggest player in the region, what Nigeria as a country does within its own territory, or does not do, impacts greatly on the security and safety situation in the region. It was for this reason the country took the bold step of enacting the Suppression of Piracy and Other Maritime Offences (SPOMO) Act in 2019, a stand-alone law for prosecuting pirates and other maritime criminals in the court of law. Before the enactment of SPOMO Act 2019, it was almost impossible to prosecute pirates under existing laws due to the absence of guidelines to follow, considering the peculiarity of the crime of piracy that takes place at the high seas, with little or no prospect of producing practical evidence in court. This, in addition to lack of synergy among the various maritime agencies, created a loophole that allowed pirates to literally have a field day.

The SPOMO Act has made it possible to develop guidelines that would simplify the process of prosecuting pirates in court. But that is not going to mark the end of piracy in our waterways. It is just an addition to other strategies that are required to create the right environment that would make Nigeria tap fully the potential that is inherent in the maritime industry.

The Nigerian Maritime Administration and Safety Agency (NIMASA) recognizes the imperative of collaboration in the onerous task of keeping the maritime environment safe and secure, not only for local activities but also, very importantly, to enable the country to participate fully in the seaborne arm that accounts for more than 65 per cent of world trade. The strategy of collaboration has proved to be a success, as NIMASA has, in the last one year, achieved a synergy with the agencies that constitute the nation’s maritime security architecture – Nigerian Navy, the Police and the Department of State Services – on one hand, and sister maritime agencies like the Nigerian Ports Authority (NPA) and the National Inland Waterways Authority (NIWA), as well as the Office of the Attorney General of the Federation, on the other.

So far, NIMASA has secured judgement at the Federal high courts in Lagos and Port Harcourt against 10 criminals, seven Nigerians and three foreigners, who were each sentenced to seven years in prison for maritime offences on the country’s waters. This is significant progress on the implementation of the SPOMO Act. Hopefully, another judgement will be secured in May.

Suffice to say that these convictions have greatly improved the image of Nigeria in the international maritime circle. It has portrayed the country as being sincerely committed to ending piracy in the Gulf of Guinea. Before now, Nigeria was seen, wrongly though, as not doing enough to curtail piracy in the region, the reason freight charges on cargoes coming into the country are about the highest in the world.

But there is a lot that still needs to be done to keep Nigeria’s maritime environment safe and secure, from the perspective of making the anti-piracy law take its full course on criminals. This would involve expanding the circle of collaboration to include the judiciary – judges, lawyers and other relevant agencies – with everybody working for the common objective of achievement of security in Nigeria’s waterways.

The annual Nigerian Admiralty Colloquium is one of the ways through which NIMASA seeks the collaboration of all stakeholders in the effort to improve maritime law administration in Nigeria. The agency has achieved some milestones with the colloquium. Apart from the convictions, it has secured for maritime offences, the communique issued by judges during last year’s edition of the seminar on the SPOMO Act has already been sent to the National Assembly, and would serve as an input in the amendment of the Act.

The 10th edition of the colloquium held on April 20, 2021, provided yet another opportunity to highlight the need for collaboration to achieve a conducive maritime environment. The theme for this year’s edition of the colloquium, “Achieving Maritime Safety, Security and Shipping Development through Enforcement of Legislation and Implementation of the Deep Blue Project: The Role of the Judiciary and State Actors”, captured quite succinctly the crucial role of the judiciary in the effort to strengthen the administration of maritime law in the country.

NIMASA plans to effect necessary adjustments in the maritime law sessions from the 2022 edition of the colloquium. The scope of the colloquium will also be expanded to include justices of the Supreme Court and more lawyers. This would go a long way in improving the processes and procedures of justice administration on issues that affect the maritime sector.