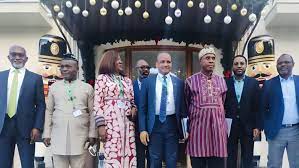 Nigeria’s trade relations with Greece at an official level dates back to 1970 when both countries established diplomatic relations with each other. Before then, Greek companies had been operating in Nigeria, some dating back many decades, playing significant roles in the Nigerian economy, essentially in manufacturing.

Over the years, trade between the two countries has remained largely in favour of Greece, with more imports from that country to Nigeria than the other way round. Maritime trade has been akin to scratching the surface of what should otherwise be a robust relationship in which both countries could benefit immensely. The semblance of maritime relationship has for many years not gone beyond the involvement of Greek-owned ships in carrying Nigerian crude oil.

However, with the changing dynamics in the maritime sector of the Nigerian economy in the last few years, there are hopes of a new era of a more mutually beneficial maritime trade relationship between the two countries. The Greek-Nigeria Chamber of Commerce and Technology Investment Summit which took place in Athens, the Greek capital last week, provided an opportunity for the two countries to explore ways through which they could improve bilateral relations, with a focus on trade.

One of the areas of priority that will engage the attention of the countries is maritime, an area where the huge potential exists but is largely untapped. The Honourable Minister for Transportation, Mr. Chibuike Amaechi, said this much when he drew the attention of participants at the summit to the relatively low competitiveness of the Nigerian maritime sector against global and continental contemporaries, emphasizing the fact that the sector is a fertile ground for investors to explore.

The appointment of Mrs. Opunimi Akinkugbe by President Muhammadu Buhari as Nigeria’s Ambassador to Greece last year, after many years of not having the highest level of diplomatic representation in that country, was meant to facilitate restoration and improvement in bilateral relations between the two countries. The fact that the new ambassador mentioned maritime as one of the key areas she would be focusing on in her effort to woo investors into Nigeria is indicative of the investment opportunities that abound in the sector. This is more so as the country is working to diversify its economy, to shift attention from oil on which it has depended for decades. Maritime is one of the major sectors on which the country’s hope of diversifying its economy rests.

Greece is a major maritime destination in the world, considering its very robust shipping industry that is evident in the involvement of its vessels in global maritime trade. The current conducive maritime environment in Nigeria presents an opportunity for it to get involved in an industry that is designed to make the country the maritime hub in the Gulf of Guinea and Africa. The statistics bear this out.

The Gulf of Guinea where Nigeria is the biggest player has a coastline of about 6,000 kilometers; generates about $950 billion annually in revenue; has a market size of about 470 million consumers; holds five per cent of the worlds total oil reserves; has an export value of $180 billion and an import value of about $105 billion.

Nigeria’s leading position in the Gulf of Guinea is reflected in the fact that half of the population of the region live in the country, while it contributes more than half of the regions GDP. A chunk of the country’s foreign exchange comes from oil, which also accounts for 80 per cent of its budgetary revenues.

Beyond the impressive statistics, Nigeria now has a maritime environment that is gradually changing the narrative on the Gulf of Guinea in terms of security and safety. For many decades, the international shipping community has perceived the Gulf of Guinea as the least secure and safe in the world. This perception has cost the region unquantifiable economic losses.

Nigeria, which accounts for about 75 per cent of maritime trade in the region, bears the brunt through an astronomical premium by offshore underwriters on Nigeria-bound cargo, which reflects in the high cost of imported goods and locally manufactured goods with imported raw materials. However, with the highly improved security situation in Nigeria’s waters, which is reflected in the sharp reduction of cases of piracy and other maritime crimes in 2021 a development that has been duly acknowledged by the International Maritime Organization (IMO) the international shipping community would no longer have reason to shun the country’s maritime environment.

The relative security in Nigeria’s waterways and, by extension, the Gulf of Guinea, has created a conducive environment for the blue economy to thrive in the country. This has been the preoccupation of the Nigerian Maritime Administration and Safety Agency (NIMASA) since the beginning of 2021. The aim is to ensure Nigeria derives fully the benefits that abound in its creeks, rivers, lakes, seas and oceans for its economic development and improved standard of living of its people. This is one area, which Nigeria’s renewed partnership with Greece should seek to explore.

It is a new era of involvement in an area that has not received the attention it deserves from international shipping investors, including Greeks to whom the industry is a well-known terrain.