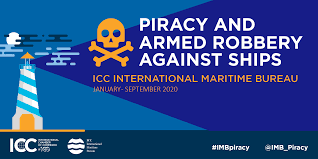 There are strong indications that the security situation in Nigeria’s waterways up to the Gulf of Guinea is improving. The Q3 2021 report of the International Maritime Bureau (IMB) is loud and clear on this. This is cheering news for stakeholders in the Nigerian maritime industry in particular and the country in general.

The report says the Gulf of Guinea recorded 28 incidents of piracy and armed robbery in the first nine months of 2021, compared to 46 in the same period in 2020. What is of particular importance to us in the report is the fact that Nigeria reported only four incidents during the period, against 17 and 41 cases that were recorded in 2020 and 2018, respectively.

It bears mentioning that IMB attributes the reduction in crime rate in the Gulf of Guinea to enhanced maritime security and response coordination measures adopted by national and regional authorities in the Gulf of Guinea. This refers to measures adopted by individual countries as well as collective efforts by countries in the region to tackle the menace of insecurity through partnerships and collaborations.

At the Nigerian Maritime Administration and Safety Agency (NIMASA), we feel encouraged by the IMB report which we see as an indication of the fact that we are on the right track in our efforts at tackling insecurity not just in the country’s waterways, but up to the Gulf of Guinea. While we welcome this recognition, we are not under any illusion that the battle against piracy and other forms of criminality in the Gulf of Guinea has been won. I have had cause to say on this page that criminality in the maritime environment is assuming new dimensions and levels of sophistication around the world every day. This requires constant innovation in technology, strategy, processes and, very importantly, collaborations and partnerships to keep criminals at bay. This is exactly what NIMASA has been trying to do in the last 20 months or so. And, to some extent, the exercise is yielding positive results.

Without a doubt, the Integrated National Security and Waterways Protection Infrastructure, otherwise known as the Deep Blue Project, has been the key factor in the reduction of cases of piracy and armed robbery in Nigerian waters, which the IMB report alludes to. The Deep Blue Project is a security architecture involving collaboration between the Federal Ministry of Transportation represented by NIMASA and the Ministry of Defense, represented by the Nigerian Armed Forces and the Police as well as the Department of State Services. The project, the first of its kind in the history of maritime security in Nigeria, is the brainchild of NIMASA which is designed to manage, control and protect the country’s maritime environment using the latest technology and highly trained and specialized manpower. It is one of the many ways through which the agency is working to make the Nigerian maritime environment secure and safe, so economic activities can be carried out without hindrance of any form, in Nigeria and the entire Gulf of Guinea.

In his Independence Day broadcast, President Muhammadu Buhari acknowledged the fact that the Deep Blue Project is on course to achieve its objective of tackling insecurity in the Gulf of Guinea, so as to enable the country to derive maximum benefits from the maritime activities that go on in the region, where it accounts for over 70 per cent. Barely eight months into its operation and four months after it was officially commissioned by the President, the Deep Blue Project has proved to be potentially the answer to insecurity in the country’s waterways.

The relative success recorded so far with the Deep Blue Project has come about as a result of the effective collaboration among all the parties involved in the project. This is a clear proof of what could be achieved through collaboration and single-mindedness of purpose.

With regard to the response coordination measures adopted by regional authorities which is mentioned in the IMB report, it is important to say here that Nigeria, through NIMASA, is currently working in collaboration with Cameroun on an international framework that would enable joint efforts in tackling insecurity that has plagued the West and Central African regions for a long time, making the Gulf of Guinea the most insecure and unsafe maritime environment in the world.

The framework, which is known as the Gulf of Guinea-Maritime Collaboration Forum/Shared Awareness De-confliction (GoG-MCF/SHADE), focuses on counter-terrorism, piracy and armed robbery by bringing together regional, international, industry and non-governmental organizations partners for the purpose of advancing and coordinating near-term maritime activities. This would achieve the purpose of having a set of common operational objectives for protecting vessels operating off West and Central Africa.

The IMB report warns that despite the noticeable reduction in piracy and other forms of criminality in the Gulf of Guinea, the risks to vessels and crew still remain high. It also advises stakeholders in the Nigerian maritime sector to be cautious as the dry season approaches. We at NIMASA are not unmindful of this fact. It is the reason we are working tirelessly to step up our game, knowing full well that the battle is far from won. The common goal is to have an environment where all maritime activities – economic and social – would thrive unhindered.